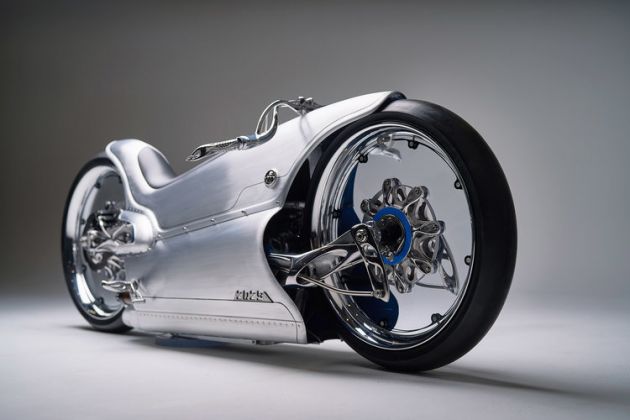 Custom motorcycles cover a very wide range of definitions, going beyond traditional metalworking techniques, giving rise to a series of die-cut cruisers and bobbers fitted with V-twin engines. The application of modern production techniques such as 3D printing and CAD / CAM design gave birth to the Fuller Moto 1929 2020 custom motorcycle.

Taking inspiration from a 1920s French motorcycle, the Majestic 1929, the Fuller Moto 1929 follows a clean Art Deco style that embodies an era of stylized design and curved shapes. Built to make its Handbuilt Show debut in November 2020, the 1929 is a unique custom motorcycle commissioned by Haas Collection in Dallas, TX.

The basis of the 1929 is a Zero Motorcycles FXS electric bike, with a maximum power of 20 kW and a maximum torque of 106 Nm. Fuller Moto encountered problems during the build of 1929, the battery of the FXS being too large, the The location of the batteries and the motor was therefore reversed, giving the 1929 its elegant form.

Clad in 3003 aluminum, the 1929 has a central hub steering, detached from a Bimota Tesi. Components and parts made from 3D printed titanium, allowing the 1929 to look organic, grown from metal, like HR Giger’s biomechanical designs.

The front swingarm is a 3D printed part, just like the handlebars. Designed by Bryan Heidt, principal metalsmith at Fuller Moto, concept artist for the film Nick Pugh, who had previously worked on Star Wars, an Oerlikon 3D printer was used to fabricate the components.

Noteworthy are the 23-inch wheels, which feature clear polycarbonate discs to connect the rims to the hubs. Bobby Haas, owner of the Haas Moto Museum and Sculpture Gallery, says, “We know we are doing something that has never been done before. There is no real plan. We are not doing a production cycle. We do a job that runs on art. It is unique.