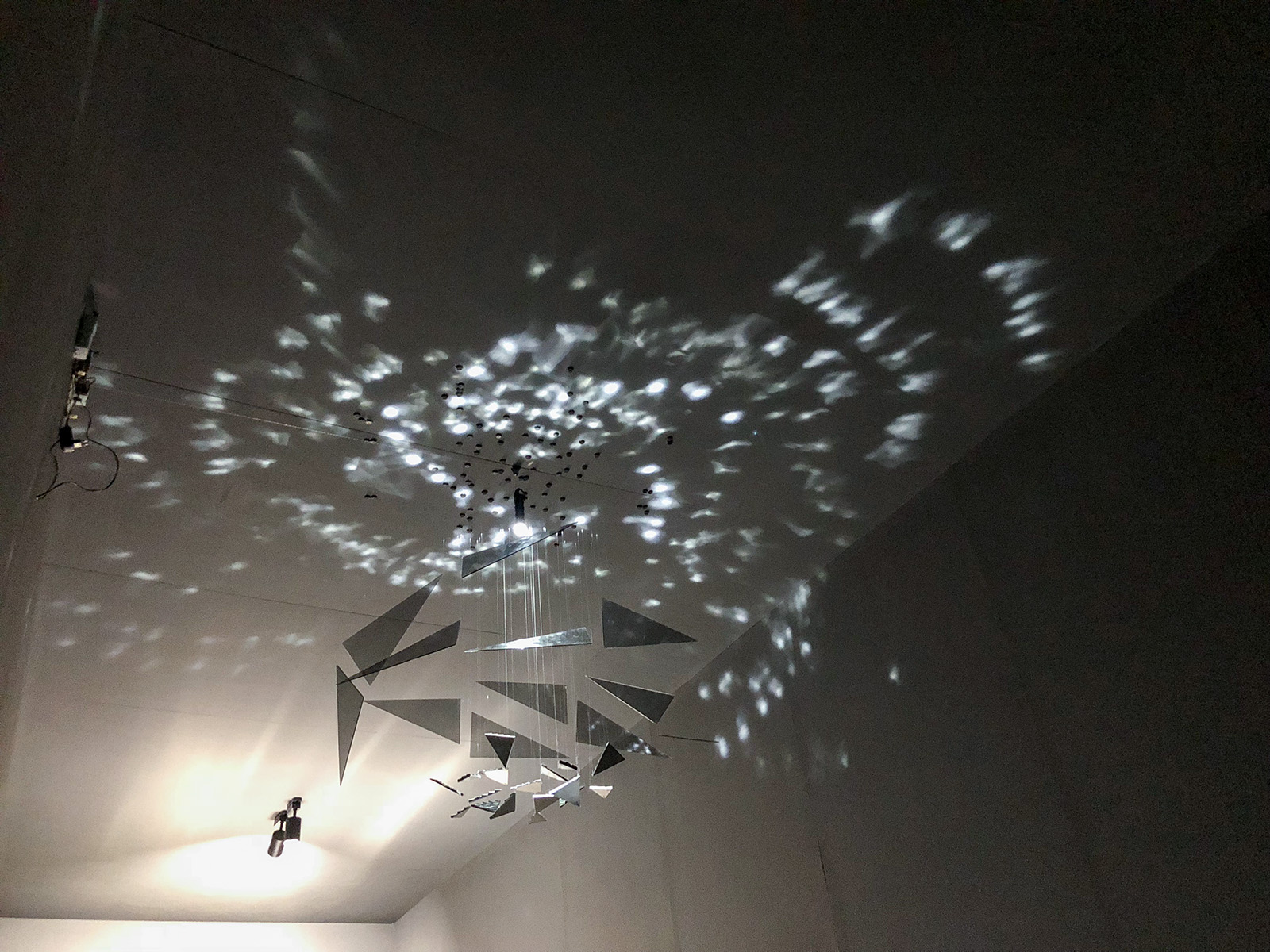 Seph Li’s multimedia artwork “Cosmos” uses reflective mirrors and physical theories to reveal the mysteries of our universe – or universes.

Li, a former student of media design arts, will exhibit “Cosmos” at the Shanghai Art Fair, which opens Thursday and runs through Sunday at the Shanghai World EXPO & Convention Center. The piece ruminates on the theory of the multiverse – the notion that several universes exist simultaneously – through a light sculpture.

Li built the installation room “Cosmos” using light and a series of reflective surfaces. The surfaces reflect a slowly moving flashlight beam, producing images of pixels in space. Li said the mirrors are arranged in the shape of a nebula and also represent a star in the vast cosmos. When the flashlight moves, it changes the shape of the artificial cosmos.

“Depending on the angle of the mirror, sometimes you can see the reflections and at another angle you cannot see it,” Li said. “I was intrigued by making an installation involving moving images. which can change what you see depending on where you are standing. ”

Li created the piece in 2014 after reading an article on the Nautilus science blog and finding inspiration in the theoretical physics presented. The article explained that when the equations of general relativity and quantum theory are merged, the element of time is removed from the final equation.

The idea is part of a long-held theory of some physicists who have suggested that there could be two existing universes whose opposing motions counterbalance each other. “Cosmos” incorporates the constraints of scientific thought to present a mysterious double universe reflected on the neighboring wall space.

Werner Thöni, owner of the Werner Thöni Artspace gallery in Barcelona, ​​Spain, where Li created and exhibited “Cosmos”, said he was impressed by the conciseness with which Li rendered such a complex scientific theory.

“What was really interesting to me was the way he was able to speak poetically about the concept,” Thöni said.

Both in the theories of physics and in his own works of art, Li said that the viewer’s perception depends on physical positioning. Since people cannot see the movement of their own universe, Li said that they could only see the flow of time if they stood inside the cosmos looking at the universes. Likewise, viewers must physically change their position while viewing the installation to experience the images reflected in “Cosmos”.

“Visitors can enter the area where they see the virtual images floating in the air and they have to get close enough to see the entire hidden other universe,” Li said.

Peter Lunenfeld, a design media arts professor who was part of a faculty committee that reviewed Li’s thesis work for his master’s degree, said the mirrors and reflected images in “Cosmos” behave like a metaphor of virtuality in relation to the physical existence of objects.

“The question is, the images on the ceiling that we can see and experience – how real is that and does it have as much reality as real starlight?” Lunenfeld said.

“His pieces attempt to massage between the real and the virtual by creating environments in real space that allow a portal to virtual space,” Lunenfeld said. “(‘Cosmos’) is a perfect example of how (Li) is constantly trying to connect worlds that are not normally connected. ”

The concept and objects were originally designed digitally and later 3D printed into tangible pieces. Thöni said that converting computerized information into physical reality amplifies the feeling of the unknown, both in the cosmos and in the creation of the work itself.

“He created something in a computer, then did it in real space, calculated exactly with all the angles to create a spiral nebula shape,” Thöni said, “It’s like some kind of miracle . ”

Visitors to the gallery who saw “Cosmos” on display in Barcelona reacted to its meticulous setup with surprise, wonder, awe and curiosity, Thöni said. Li’s work has stepped into experimental territory that most commercialized artists do not venture into, he said.

“Normally we don’t see commercial artists doing something different like (‘Cosmos’),” he said. “The reaction was to ask what it was, what it meant and ‘What is it?'”

Digital and media art is slowly being accepted in the public art realm as interest in interactive experiences increases, Li said.

“People think traditional art doesn’t have enough interactivity… yet they think digital art alienates them because it’s still digitally made,” Li said. “This could be the time when the public is more interested in the interactivity of digital. ”

Lunenfeld said Li’s art uses the latest technology in order to address a global audience by touching a common accord of human experience and the question of what lies beyond the known world.

“It is a work of art that uses as one of its multiple entry points … something that is close to our hearts, it is what happens to us, the meaning of ourselves or even the sense of our souls when we look up into a dark night sky, ”Lunenfeld said.

These 3D art images of Gwadar are fascinating