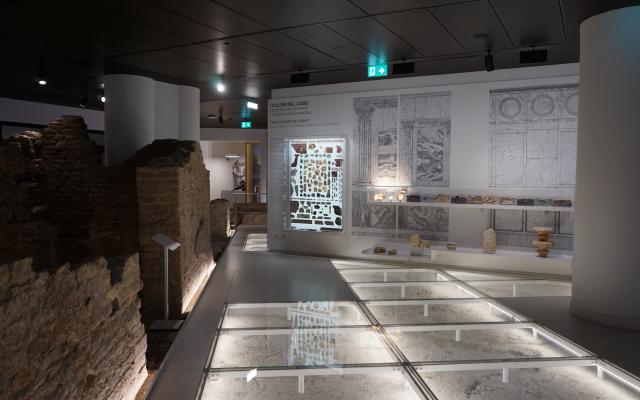 At Museo Ninfeo, visitors walk through the ruins of the luxury Roman garden

Roman ruins are not normally found in insurance company buildings. Yet at the Roman headquarters of Enpam, the national insurance and assistance organization for doctors and dentists, visitors descend underground to the remains of an ancient luxury garden complex.

Open to the public in November 2021 and located in Piazza Vittorio just south of Rome’s main railway station, the archaeological site and new museum, ‘Museo Ninfeo’, is the result of nearly twenty years of work, the complexity of which involved the construction of a parking lot under the excavation and a multi-storey building above. It is an excellent example of how the sensitive preservation of archaeological remains in their original location and modern urban development are not mutually exclusive.

The exhibits of Museo Ninfeo are incorporated into the archaeological area, which means that visitors view the objects found at the site by walking over and through the ancient structures. The museum tells the story of this specific part of Rome from the 4th century BC. AD, when it was still located outside the city from the Republican era, until the 9th century AD, when it was largely abandoned after the end of the ‘Antiquity.

In its earliest historical phase, traces of plowing and planting show that the area was devoted to agriculture. Then, in the second century BC. The soil was quarried from pozzolan, a type of volcanic sand that was used to produce concrete and was instrumental in the construction of Roman buildings.

Between the last years of the first century BC. AD and the first decades of the first century AD. Horti Lamiani. Although the Latin word ‘hortus’ is often translated as “garden”, these large estates were more akin to luxurious private parks. Artfully laid out and adorned with pavilions, water features, artwork, flowers, trees and animals, Horti were places where Rome’s wealthy could retreat and relax, away from the densely populated center. Lamia was not alone in creating such a space, and the gardens of other Roman aristocrats surrounded the ancient city with an artificial countryside.

The stream of consciousness of a flying object