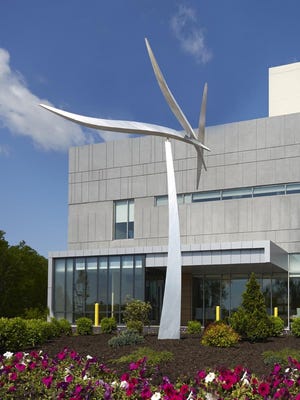 Three years ago, community groups and businesses in North Brevard, in conjunction with the Brevard Cultural Alliance, presented an art festival that had nothing to do with the typical art festival. There were no rows of tents, no paintings on easels or sculptures on shelves, but focused on what he called â€œthe arts in the digital realmâ€.

Art & Algorithms has drawn worldwide attention to Titusville and has become a highly respected annual event, set to return downtown from October 5-11.

The BCA, which is celebrating its 40th anniversary this week as an organization, and Palm Bay officials are hoping for much the same, for that matter, with liberal environmental help, with the Art of Sustainability, which is scheduled for February 2016 at Eastern Florida State College in Palm Bay.

The festival, scheduled for February 17-21, will feature kinetic art, defined by the Guggenheim Museum as “the art of real and apparent movement,” in this case, giant pieces designed to harness wind and water power. , for the sake of environmental awareness. If all goes according to plan, these pieces created by artists from this country and abroad will be installed around the campus lake and its surroundings. Confirmed artists include Jeff Kahn (jeffkahnsculpture.com) and Ralfonso (ralfonso.com). The sculptures will be on display from February 17 to March 17.

The theme of the Kinetic Arts Festival will be reinforced by seminars and workshops related to ecological issues – sustainability – crucial for a region like Palm Bay, which has so much land and water, so many natural resources. If all goes according to plan, it should do for Palm Bay what â€œArt and Alâ€ did for North Brevard: give it some sort of artistic identity, and the attention that goes with it.

â€œIt’s a really interesting story,â€ said Neil Levine, executive director of BCA. â€œA few years ago we came to the conclusion that we really wanted to build the capacity of local communities to celebrate themselves, to come up with a new vernacular for themselves. In our opinion, events such as traditional art fairs were good, but we wanted to find something different enough to draw people to these communities.

It is about identifying an event with a territory, he added.

â€œIn the north of the county you have a lot of people who care about how they are viewed. What is different about them? The answer, of course, is technology, and we’ve found an artistic and cultural entertainment (festival) that completely complements that. So, Art & Algorithms was the name of the first such event, and people, not just here, but around the world, are paying attention. It gives them the opportunity to be proud, â€Levine said.

Then came Palm Bay, across the county, with a different kind of identification.

â€œWhat we wanted to do there was help the people of Palm Bay to reflect on the perception of what Palm Bay is and to be proud and positive about it,â€ he said. â€œPalm Bay has more flora and fauna than you can imagine, so we wantedâ€¦ to have the perfect art form, and that is the art of sustainability.â€

Part of the art of sustainability will be art.

â€œWe really want to create symposia and workshops, so over the course of three to five years, we can bring in more delegates to discuss sustainability. Really, we are using art to provoke debate. It is not art for the sake of art but art as a catalyst, â€said Levine.

The arts in schools are the key to student growth

This suits residents of the town of Palm Bay, which has been described by BCA spokesperson Tina Lange as a â€œcommitted partnerâ€ of BCA, as do the EFSC, Harris Corp., Marine Resources Council, Waste Management and the National Endowment for the Arts.

â€œWe probably haven’t done everything we could have done to promote arts and culture in Palm Bay, so this is an opportunity for us,â€ he said. â€œPalm Bay has a lot of land and a lot of water. … Everyone talks about our natural beauty, and we have easy access to nature (attractions); we will have one of the largest bass fishing and birding areas in Florida. It is about our natural environment. We therefore believe that attracting athletes and sustainability go hand in hand. “

He was particularly excited about this rare NEA grant, only the second time such an award had been presented to the Brevardians. The first went to Art & Algorithms.

“Two years ago Arts & Algorithms was fortunate enough to offer a youth program through a grant from the NEA, (which) had never funded (an activity) in Brevard County before,” said said Levine. â€œThe NEA will also be involved in Art of Sustainability. “

Neither Levine nor Anderson would speculate on the potential effect of Art of Sustainability on Palm Bay, but Marcia Gaedcke, president of the Titusville Area Chamber of Commerce, praised Art & Algorithms.

â€œIt was really a great experience,â€ she said. â€œThe recognition that we are recognized in the artistic community internationally is wonderful. We are building relationships with other events and other artists around the world. People are becoming aware of Titusville and North Brevard as a cultural destination, and from there they consider other opportunities in the area.

While such recognition does not happen overnight, it will be worth it and the wait, she added.

â€œOur goal was to bring tens of thousands of people to this region for a unique arts festival,â€ Gaedcke said. â€œWe’re not there yet, but we’ll get there; we can see the recognition that the festival has already brought and it’s already going faster than we thought when we started. It’s different, so people have to be patient, but the notoriety and recognition that this will bring to the community is a big victory. … This is a great victory and a great opportunity.

â€œYou know, Palm Bay once had art and culture; we just haven’t really promoted it, â€he said. â€œBut now there’s a professional class here that wants (this). There are so many millennials here who demand these things, and we want to prove that we will serve them. And you know what? It’s cool. Harnessing wind energy, harnessing hydraulic energy with art? That’s great.”

The Art of Sustainability, a kinetic sculpture event presented by the Brevard Cultural Alliance and the City of Palm Bay, will take place February 17-21 at Eastern Florida State College, 250 Community College Parkway SE, Palm Bay. In addition to the Kinetic Arts Festival, the wind sculptures will be on display from February 17 to March 17. Call the BCA at 321-690-6817 or visit artsbrevard.org. Send a Tweet to @artsbrevard