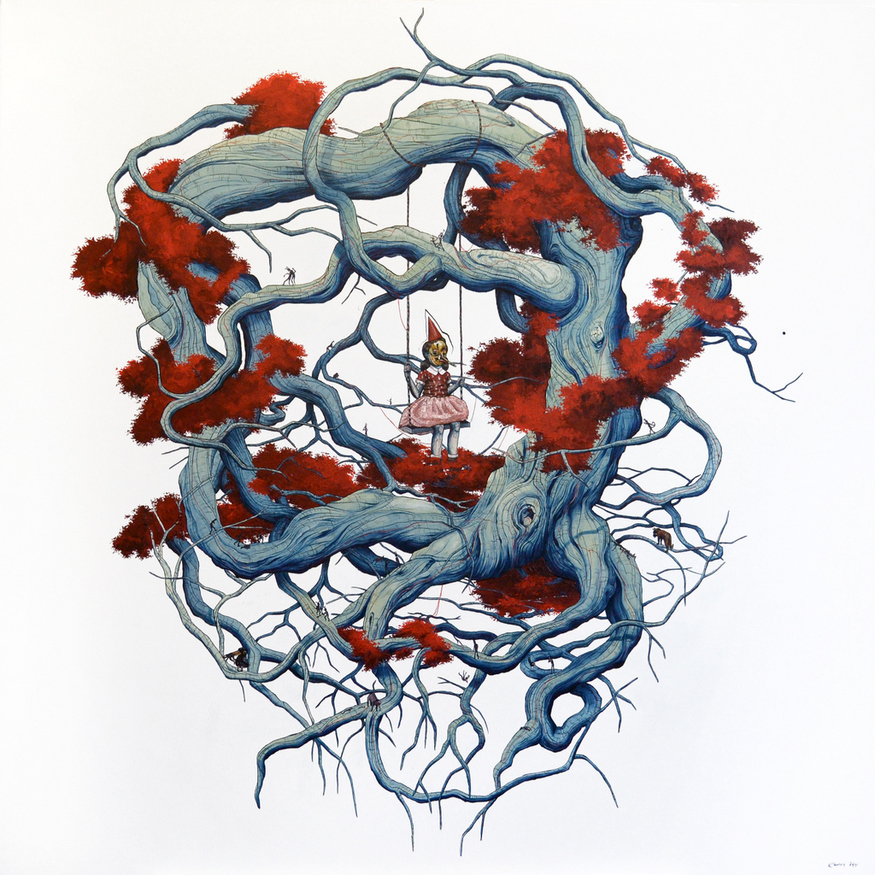 The tunnels near Waterloo station provide an ominous setting, where the rumble of trains overhead only adds to the atmosphere of the place. We saw it hosting a zombie invasion and, in ‘Bedlam’, one of our favorite art shows last year.

Black Rat Projects took up another arch and filled it with individual and collaborative works by two of their iconic artists, Giles Walker and Candice Tripp. Tripp exhibited several of his vivid paintings. They look like a dark fairy tale where masked children hang out with bad intentions in mind.

Giles Walker, meanwhile, creates small sculptures of birdmen in various poses. Sometimes they’re harmless, maybe commuting on the subway or putting up a notice board. Other times they are quite disturbing, with scenes of domestic violence and alcoholism.

The real stars of these exhibitions are the places of collaboration between the two artists and the kinetic sculptures. Entering the gallery, overcoat mannequins sway to the beat of spooky music while inside, two beheaded corpses hang from the ceiling, writhing as if they were dying.

Most disturbing are the bags hanging from the ceiling that bulge as if a small child inside is trying to get out and a mother with a head lampshade cradling a pram, which is draped in a Union Jack, back and forth. while she is holding a pair of scissors. They both hint at something sinister while hiding the real horror from visitors.

This is an incredibly spooky exhibit with a dark atmosphere. We liked it. The show is only two weeks long, so you’ll have to be quick if you want to catch it.