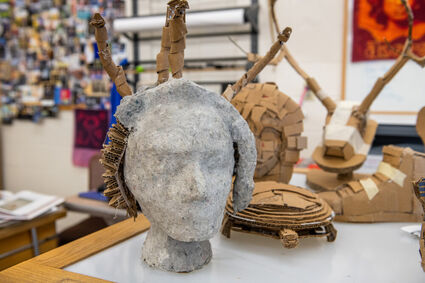 Students at Havre High School are creating three-dimensional art this term, a change made necessary by the COVID-19 pandemic.

Students create sculptures of all kinds, but the most common among them are animals, mythical and otherwise, as well as heroes and villains of modern and ancient media.

Kendall Griggs, an art teacher at Havre High School, is overseeing the projects and said the students create the bases for their sculptures from wire, foil and cardboard, which will be covered with clay paper mache based which can be sanded and painted.

Some students are still building their bases while others are now applying clay.

Griggs said students would normally be working on glass mosaics around this time of year, but he and his students found shards of glass in their masks when they tried, so they had to change.

“It definitely came from COVID,” he said.

He said he was leading similar projects in more advanced art classes and it seemed like a good substitute for the glasswork they would normally do.

“It’s fun teaching 3D art to kids,” he said. “… I think children are more successful working with their hands than with the paintbrush.”

Senior Quimn McDonald, 18, said she had fun building her dragon, although she had to spend almost an entire day carving the triangular cardboard scales that now adorn it.

“I always have fun in art class,” said McDonald.

She said she planned for a black, red and gold color scheme after the clay layer was applied.

Year one Arabella Dabis, 15, takes it a step further with her portrayal of Maleficent, but it wasn’t without tribulation and change of plans.

“Getting the base upright was tough,” Dabis said. “… It was going to be an angel but there were a few missteps.”

Griggs said teaching 3D sculpting was fun, and he could keep it for years to come, for practical reasons at least.

Sculptures in progress rest on a table Wednesday in an art class at Le Havre high school.

The students in his class have certainly been busy, he said, having worked with wax on cloth and mirror engraving, with pottery to come.

He said he had other classes he wanted to do stained glass with this year, but now has to wait.

Griggs said COVID-19 has been tough on art classes, with the first semester of this year being very tough with students in class two days a week.

“Online has been kind of a nightmare,” he said.

He said he was able to teach students at home using an art theory textbook, which was not difficult, but cannot be compared to hands-on learning.

“I taught English for 14 years so it was easy but not exciting at all,” said Griggs.