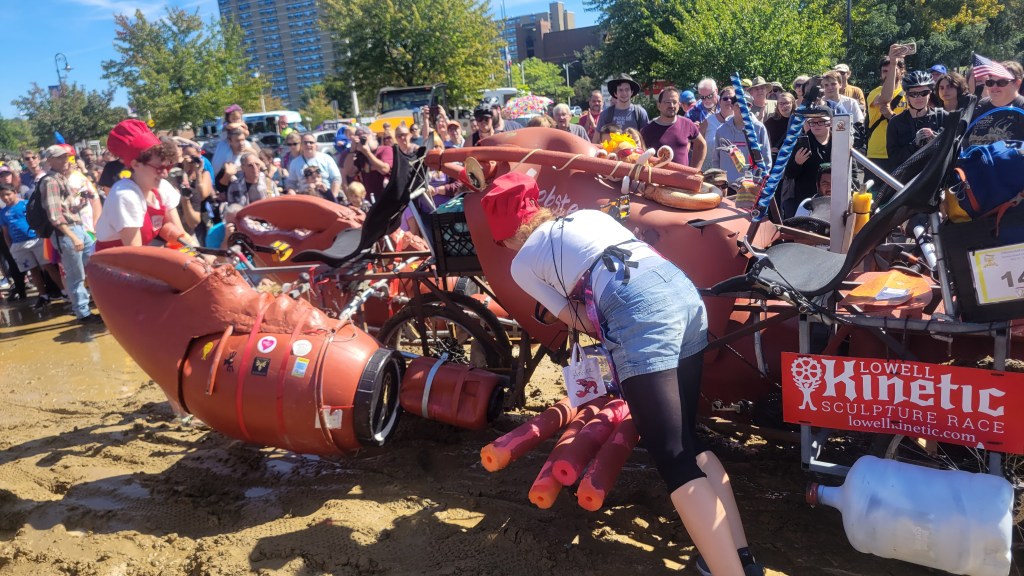 You just have to start.

“It’s a race you win the moment you cross the start line,” Phil Smith said on Saturday before the race.

Smith is the lone pilot of Pinktastic, a pedal-powered sculpture that is pink, really pink.

It sports chunky rubber tires fixed with pink water paddles and it’s a mix of welded steel at the back and everything else pink: pink pool floats, pink tassels, flags and pink boas.

The race is simple. The route crosses the city. It starts on Market Street then crosses the city center and passes the Tsongas center before heading towards the Esplanade and plunging into the river. A vehicle only has to survive the journey to truly succeed.

“Kinetic Sculptures are human-powered off-road sculptures made from new and repurposed materials and designed to race through streets, water, mud, and sand,” the rules for the event state.

The color scheme and name of Smith’s vehicle was not his decision.

“That’s what happens when you design a vehicle and then let your three-year-old choose the color,” the Maryland resident said.

It’s not his first Kinetic Sculpture Race, he said hours before the race started at 11:30 a.m. His sculpture was parked between a giant, one-person-propelled rubber duck and a wheeled pirate ship with a crew of four. Smith said he hopes his vehicle survives the journey ahead.

He also said he was glad the Massachusetts course didn’t feature the hills he’s used to in Baltimore, but he wasn’t sure about Pinktastic’s ability to float through the muddy Merrimack.

“In Baltimore, on the water section, it didn’t go well,” he said. “So I opted to do a redesign and haven’t tested it yet.”

That’s the whole point, according to race organizers.

“Engineering and science makes it work, art makes it cool,” said Howard Amidon, Director of Race Sponsor Development. “The idea is to bring attention to arts and culture in Lowell, and this race certainly does that.”

The idea was born in California in the 60s. There is also a race in Baltimore.

Lowell’s run began in 2016 through the efforts of professional project manager Mauro. In 2019, more than 10,000 people took part. This year’s race, the first since the pandemic began, is expected to draw more than 5,000 people, Mauro said.

“It’s about retired engineers, artists, students, technology professionals. Anyone who wants to scramble their hands a bit, put something together from repurposed and remade materials, challenge themselves in collaborations, art and science,” Mauro said.

All 18 racing teams crossed the start line, if not to the finish. According to Smith, that means they all won.

Tips to save money on your groceries

Where did the bauble tower sculpture at Science World go?