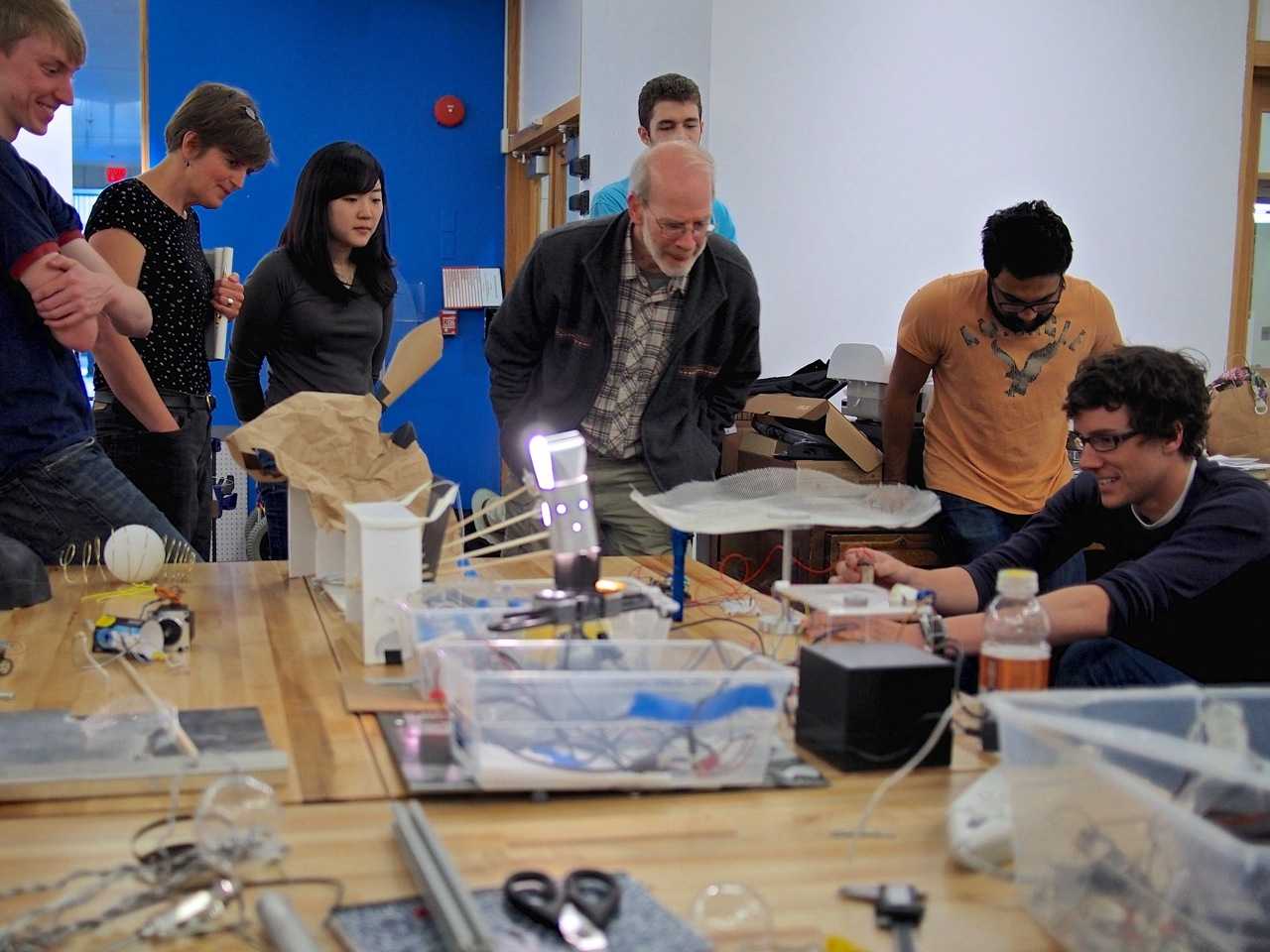 It all starts with a feeling. For their first exercise at the start of the spring semester, students of “Exhibiting Science” (STS.035) – a class in MIT’s science, technology, and society program – were asked to write their response to a post-it note. the question “How does it feel to start a new semester at MIT?” “

Each student then had to design a kinetic sculpture that used movement to embody the feeling they described, whether it was fear, anticipation, or excitement. Using everything from bamboo to rubber bands to moss, students built a kinetic art that translated energy into motion – either through the force of gravity or the elasticity of a material – to transmit something onto the body. content of the human heart.

Originating from early 20th century sculptors such as Marcel Duchamp, Naum Gabo and László Moholy-Nagy, kinetic art – where movement in a work of art is perceptible to the viewer – deploys physical movement as its main agent of ‘expression. The MIT Museum has declared this year the “Year of Kinetic Art,” building on a long tradition of exhibiting this unique type of work – Ganson’s poetic and artful machines, for example, are on display in permanently since 1995.

With the exhibition as a source of inspiration, the students in the Exhibiting Science class have now created their own kinetic sculptures to be exhibited at the MIT Museum. Powers, Lilly and Ganson mentored the students as they embarked on their mechanical creations, resulting in the rare opportunity for the students to exhibit their work to thousands of visitors. “They don’t just make prototypes for an end-of-semester exam,” says Riskin. “Students need to create pieces that will last and be of significant interest to Museum visitors. They must be well done in terms of artistry and engineering.

The Museum Studio, located next to MIT’s bustling Infinite Corridor in the Compton Gallery, is the last satellite of the MIT Museum. Here, among countertops densely covered with wire, glue, circuit boards, soldering irons, X-Acto knives, PVC pipes and other tools, is a space for creative experimentation. The Museum Studio “is a place where the art studio, engineering lab and public forum combine to create a true 21st century learning environment,” says Riskin.

As a research and development laboratory for interdisciplinary work, the studio serves as an incubator for student-led projects with exhibition potential. “It’s an ongoing exhibition of the creative process,” says Riskin, “a place where students can explore technologies as vehicles of expression and, also, for visitors to see learning in action. “

During the first half of the semester, students learned “how to use the mind creating metaphors,” explains Riskin. For example, they learned to “see gesture” in mechanical movement and to embody ideas in form and movement. Then it was about balancing art and engineering processes – realizing their artistic concept, while designing a functional piece.

But unlike a typical engineering course, Exhibiting Science isn’t all about solutions. “It’s not about fixing the problems properly. Through projects, students get to know each other and find their voice to communicate about the things that matter to them, ”says Riskin.

At the start of the class, Doyle recounted a radio interview he had recently heard with someone who had just taken a tightrope walk class. By the end of the week, the person said, he was not better in balance but he was more comfortable being off balance. And it was the same thing Doyle hoped to instill in his students: accept uncertainty.

I just found out that my mind opened up in a very different way than a technical education, ”says Dana Gretton, a sophomore who has been a fan of Ganson since seeing his work on YouTube. to college.

“The idea of ​​having a visual vocabulary is really powerful,” he adds, noting that art offers language for what is difficult to express in words. His sculpture, which deals with “loss of self in grief,” features a kettle submerged in a reservoir of water that pours liquid into a small teacup – an act that highlights the permeability of the boundaries between inside and outside.

Yoonjeong Cha, a double major in computer science and biology, was also looking for something out of the norm. “It’s so different from all of my other classes,” she says, adding, “We don’t do something that is already defined by the instructors, it’s really about exploring. I thought it was really cool. In his room, two flaps of paper, attached to wooden rods like sails, turn slowly and brush against each other periodically. Viewers, she said, should viscerally feel the resistance of the paper, as it slowly comes together and then pulls apart.

The students’ sculptures, according to Riskin, represent their “lives, memories, experiences and ambitions.” They are autobiographical, he says, adding: “Sculptures don’t just convey intended messages; they reveal something about their creators – the characters and the imaginations of the MIT students. “

The kinetic sculptures of “Exhibiting Science”, as well as the works of the competition winners, Inventions: 2014 Student Showcase, will be exhibited from May 30 to December 31 in the Peterson Gallery A of the MIT Museum (building N51, 265 Massachusetts Ave, Cambridge, MA) in an exhibition made possible with support from the Council for the Arts at MIT and the MIT Museum Friends and Patrons. Many works have been created with the support and mentorship of MIT Museum Studio. “Exhibiting Science” is sponsored by the Center for Art, Science & Technology (CAST) and the MIT Program in Science, Technology and Society.