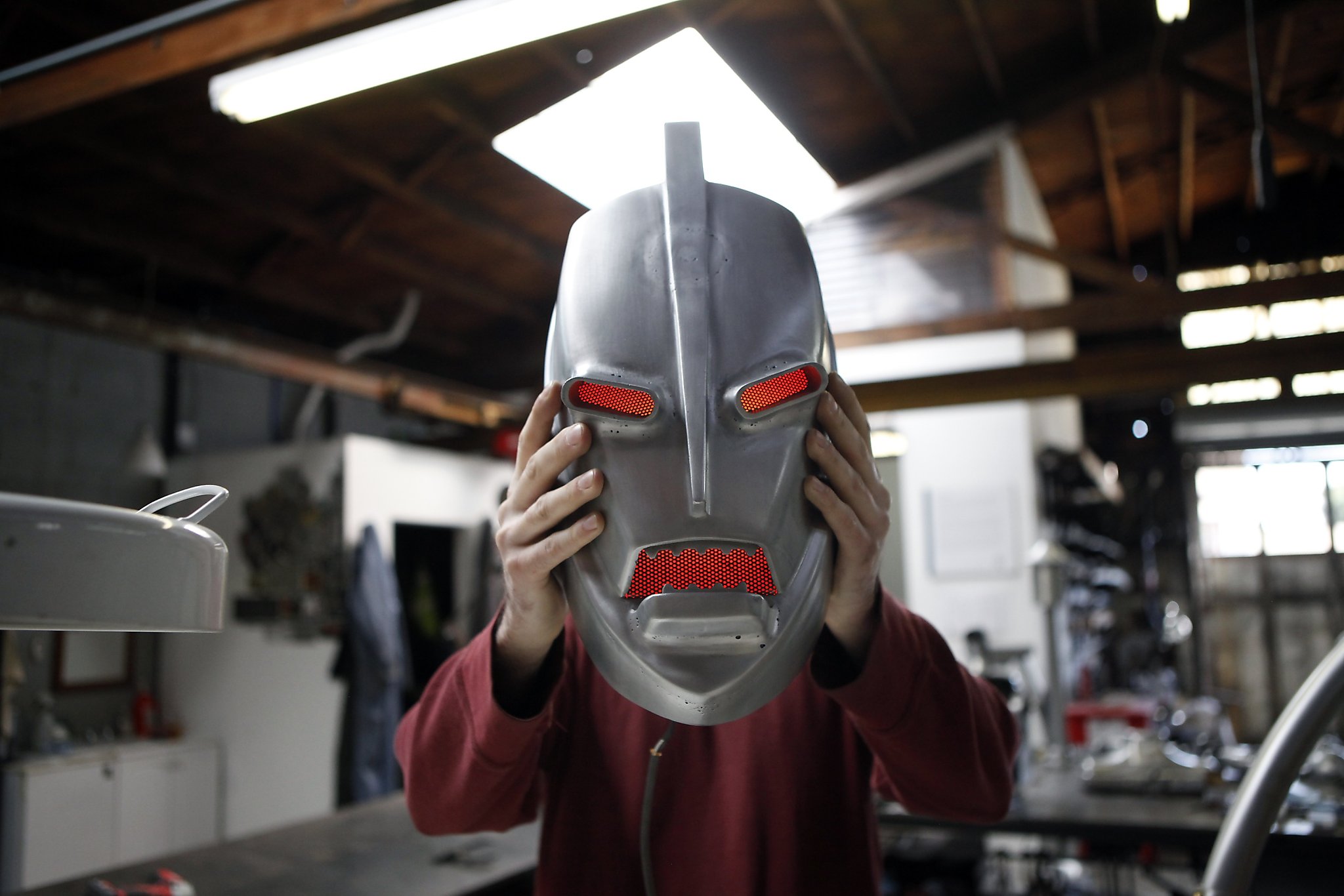 Nemo Gould’s sculptures do not stand still. They wriggle. They are buzzing. They blink their eyes. They grab their weapons.

Inside Lost & Foundry, a graffiti-covered collective home to a dozen kinetic sculptors in West Oakland, Gould plucks pieces from his collection of dumps up to the ceiling to create interactive robots, sea creatures and inspired insects. monster movies from his childhood.

“My role is to make joy accessible to adults who take themselves too seriously,” he said, running a thread through the chest cavity of “Goliath”, a robot with red eyes activated by a sensor. movement and a prominent male part.

Gould was recently commissioned by the Monterey Bay Aquarium to manufacture mechanical cephalopods for the aquarium’s new exhibit, “Tentacles: The Astounding Lives of Octopuses, Squid and Cuttlefish”. Gould designed three water “reservoirs” and filled them with an octopus with waving arms, illuminated jellyfish and floating cuttlefish. The installations will be on display for the next two years.

The gallery containing his sprawling inventions has been jam-packed since it opened in April, said Jaci Tomulonis, lead developer of the aquarium exhibit, who discovered Gould online and visited his studio.

“We interview our visitors, and what they want are emotional experiences, not a lot of text with the exhibits,” Tomulonis said. “A line of poetry, music, or kinetic artwork like Nemo’s can actually help us take some of our conservation messages a step further.”

After earning his Masters of Fine Arts from UC Berkeley in 2000, he received one of the coveted four-month artist residencies at the San Francisco Landfill, where he salvaged 30 trucks of scrap materials – still the largest number of artists has collected over the 24 years of the program.

“It was a dream! Like fishing the stream of contemporary culture,” he said.

These days, he supplements his stash with regular trips in his van to the monthly recycling depot Alameda Point Antiques Faire and Urban Ore in Berkeley.

“I was 12 years old of tentacles and squid bodies saved when the aquarium called me,” said Gould, who is named after Winsor McCay’s early 20th century comic book about a boy named Nemo with imaginative dreams. Yet all his life he has been compared to Captain Nemo in “Twenty Thousand Leagues Under the Sea”, and Gould pays homage with his Nemo dioramas in underwater mechanized battles with giant squids.

His designs are in dozens of museums, have waved the windows of Gump’s, Macy’s and Barneys in New York City, and have been used in a Nike ad, shown at the Exploratorium and San Francisco International Airport, and make part of several permanent collections, including one at Google.

But his path from a foreign artist to an initiated artist was a solo struggle. While he had hoped that his Masters of Fine Arts program would entangle him in the art world of the Bay Area, he discovered the opposite: Mainstream art critics were perplexed by his art. happy, unable to seriously criticize him, or wanting to marginalize him either in the steam-punk or Burning Man cultures.

“These are specific genres, but I don’t want to create dustproof things for a party atmosphere, because after the party nobody remembers art from a more than aesthetic point of view,” did he declare.

It wasn’t until Gould’s parents, both ceramicists, took him to see the lava lamp-bellied robots made by Clayton Bailey of Port Costa that he saw how whimsical art could carve out its own. niche worthy of a gallery.

Gould joined the Crucible art collective while in his original location in Berkeley and worked on installing exhibits at the Berkeley Art Museum.

“I couldn’t get a gallery exhibit anywhere. So I created a website and created a mailing list, and put up videos and ads on my art, walking that fine line. between being a nuisance and being irrelevant. “

Self-promotion turned into 1,600 subscribers, then orders, then galleries started calling.

Gould and his fellow Lost & Foundry tenants set up their own on-site gallery two years ago so they could control the exhibition and all proceeds from their art. Their last gallery exhibition attracted 600 people.

“The value of art doesn’t come exclusively from the work itself. There has to be a culture around it,” Gould said. “You have to have cheap wine and crackers because that’s what leads to the conversation.”

How to support the Kinetic Sculpture Lab

Beeple and NFT’s ‘Human One’ sculpture sells for almost $ 29…