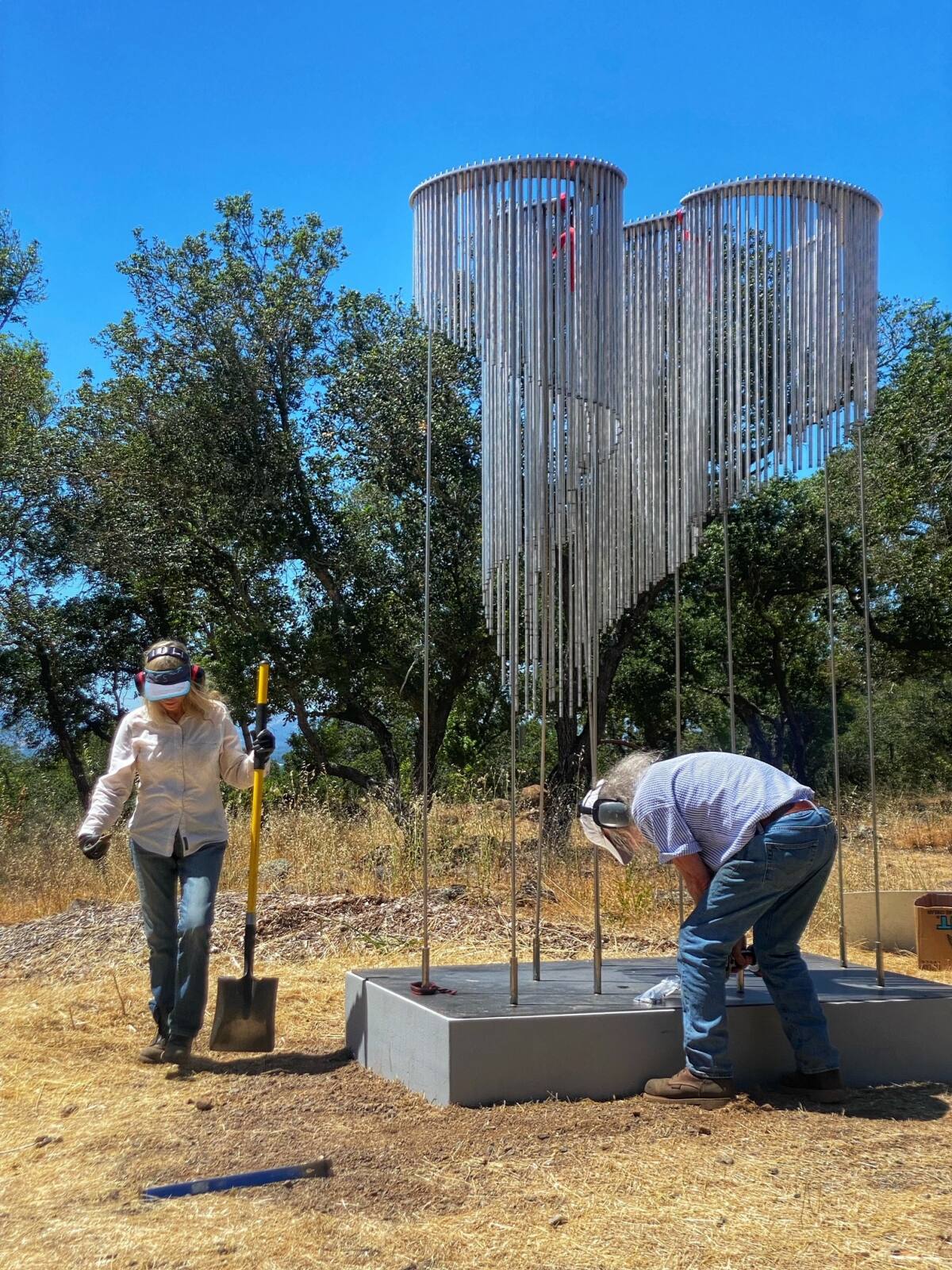 “It’s all kinetic work,” said Briona Hendren, curator of the Voigt Family Sculpture Foundation, which is overseeing the installation of the exhibit. “Each piece moves to some degree, powered by the sun, wind, or human interaction.”

“Momentum,” which opens Saturday, features pieces by local artists and will be in place until summer 2024.

The Byck family, owner of the estate, collects and exhibits monumental sculptures. For the past decade, the winery has partnered with the Voigt Family Sculpture Foundation to install rotating exhibits that last a year or more in its 4-acre Marijke’s Grove.

The new exhibition features works by artists Ned Kahn from Sebastopol, Catherine Daley from Windsor, Doug Unkrey from Healdsburg, Kristi Lucas from Santa Rosa and Mark Malmberg from Petaluma. It includes three pieces by Kahn, two by Daley, and one each from the others.

Four of the five artists currently live and work in Sonoma County. Malmberg relocates from Petaluma, Washington, but his piece for “Momentum” was conceived and premiered here in Sonoma County.

Kahn has created over 100 major art installations around the world over the past 30 years. He received a MacArthur Foundation Fellowship in 2003 and has installed many public art works, including “Digitized Field” on the AT&T building in downtown Santa Rosa.

Artist, machinist and fabricator Unkrey captured worldwide attention in 2018 when his 21-foot-long, 800-pound ball hammer sculpture was stolen from the lawn of the Healdsburg Community Center. The metal head has been recovered and the sculpture has been restored.

Daley spent three years with the Windsor Arts Council promoting the arts in Sonoma County. She is in her fourth year as a member of the Pacific Rim Sculptors Board of Directors and her second year as Vice President and Co-President of Exhibits and Events.

“This show is a celebration of art, family and perseverance,” said Judy Voigt, co-founder of the Voigt Family Sculpture Foundation, in a statement announcing the show.

The exhibit also marks the 90th birthday, Jan. 17, of Paradise Ridge Winery founder Walter Byck. Marijke’s Grove is named after his wife, Marijke, who died in 2006.

“We embrace the movement and the changes that impact our lives, and we celebrate two important milestones: the 10th year of our collaboration with Paradise Ridge and the 90th anniversary of the tireless Walter Byck,” said Voigt.

All outdoor sculpture shows at Paradise Ridge are free to the public, seven days a week. “Momentum” opens with a reception from 12 p.m. to 4 p.m. on Saturday. For more information, visit prwinery.com.

Over the past 16 years, the Voigt Family Sculpture Foundation has placed artwork in five Sonoma County towns, on three school campuses and at the regional airport. For more information, visit Celebrationsculpture.com.

Abilene is up for a ‘tree’: ‘Singing Ringing’ sculpture…