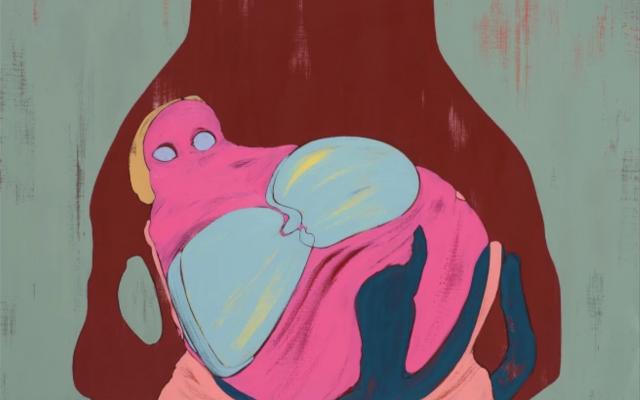 In her fall exhibition at Sadie Coles headquarters, Nicola Tyson presents nine new paintings alongside three groups of graphite drawings. Reflecting the close dynamic between painting and drawing that has activated his practice from the beginning, Maintenance boss builds on the artist’s acclaimed 2017 Drawing Room investigation, pushing her use of figuration and portraiture into experimental territory – a place, as she describes it, of “pause, a hiccup of laughter and release”.

In Tyson’s new paintings, the intensity of color – applied in bold segments – is countered by a sense of mutability or suspension. Bodies intersect in objects and vice versa. The space seems to oscillate between luminous flatness and intimations of depth. Between the trees captures different organic structures on the verge of metamorphosis or exchange: twin tree trunks slice vertically through the composition, framing a more hesitant and disjointed stack of anatomical or cellular forms: a floral “head” pierced with a radial eye, a turquoise globe suggesting a torso, two disembodied red hands and a pair of colored cores.

In Hairpiece, the body resolves – or separates – into a sort of landscape, a brilliantly striated formation that vaguely suggests a head with a single recessed eye. Here and throughout his later paintings, Tyson depicts figures or creatures that seem to be suspended between material and psychological states, while being freed from the constraints of “narrative” or the structuring patterns of “iconography”. She said her images “never fully take off – or slip into the narrative – even if something is clearly going on. Instead, they stay locked in the claustrophobic loop (Maintenance boss) of the internal logic of the array.

The dual elasticity and intensity of Tyson’s imagery suggests an inner state as much as a physical state, conveying the idea of ​​”embodied experience”, that is, the experience of the individual body. Through a combination of sharp colors and ambivalent shapes, she evokes the interplay of perception, thought and feeling that characterizes such an experience. In Pencil, a female figure rendered from amorphous color shots grips a stick-shaped pencil in one of her magenta hands, wielding the drawing tool like a weapon. The painting oscillates on the borderline of the cartoon – the character’s pink head is featureless apart from the turquoise openings of his eyes – and yet retains an air of radical openness, accentuated by the fragile blank leaves hanging down in the background.

Tyson’s art draws on and contests with that of artistic ancestors as diverse as Maria Lassnig, Hans Bellmer and Pablo Picasso. (His 2013 book Dead letters men verbalizes this mode of combative engagement, in a series of letters to deceased male artists). Her practice has its roots in a time in the 1990s when, as she recalled, painting was considered “conservative at best and probably redundant”, yet she continues to assert the vitality of her medium from a contrary feminist mindset. “Art is a kind of collaboration,” she suggested. “This assumes that you understand some of the rules – and that they can change – but you, the viewer, fill in the necessary blanks and finish the job, do half the job.”

In three series of graphite drawings, Tyson tests and revisits the preoccupations of his paintings – those of psychology and anatomy, surface and depth, fixity and metamorphosis – on a condensed scale. Between lyricism and a sense of the visceral, his compositions with rigorous tones cover the emotional and gestural range of his practice, as the critic Mark Harris observed: “Tyson’s work arrives at a fatal imaginary which oscillates between the recognizable and an assortment. of contours and tones that rebel against their referential function.

How the Critical Race Theory Debate misses the mark – Reason.com