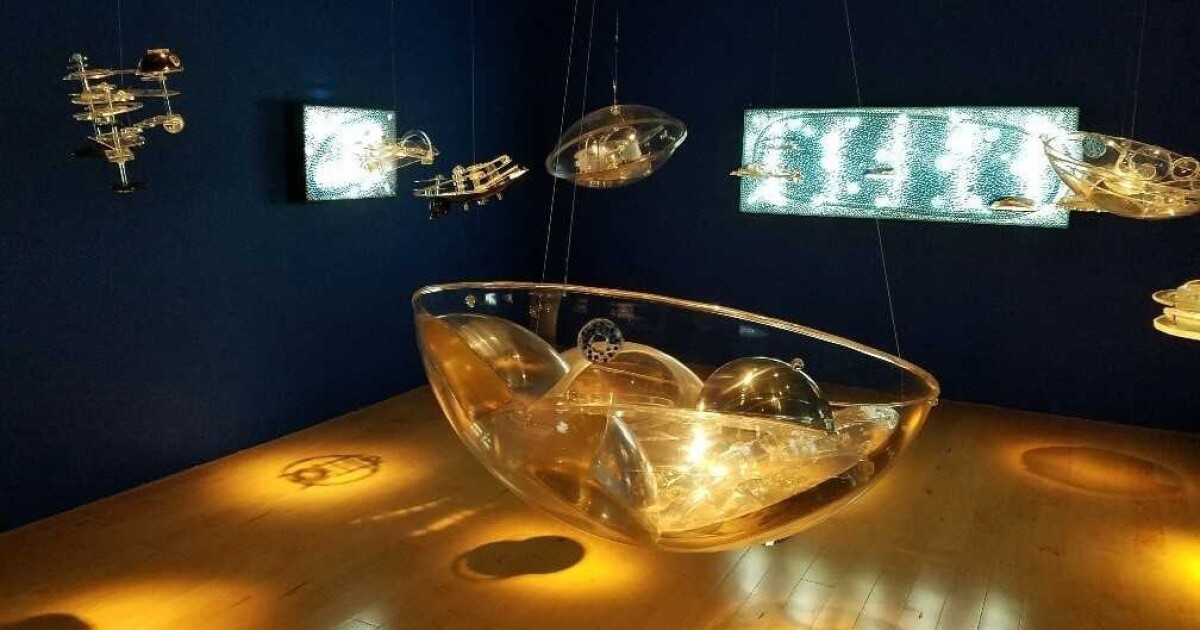 Intricate art or a clever gimmick? The choice, right or wrong, has stuck with the genre of kinetic art for more than half a century.

Artists like Alexander Calder and Marcel Duchamp are at one end of the very broad kinetic spectrum. Calder’s carefully balanced mobiles floating on gentle breezes and the swirling carnival-style conjuring of Duchamp’s Optical Rotoreliefs are hardly alike. Still, both are safe in the Modernist pantheon.

At the other end of the kinetic art range is a host of somewhat more uncertain artists, who have done assorted things that click, click, blink, spin, shimmy, and shake. Fun stuff, these works can put a smile on your face. Finally, however, they do not call much for meaningful contemplation.

At the Palm Springs Art Museum, an exhibition of over 50 kinetic works by nine South American artists who emerged at the genre’s heyday in the 1950s and 1960s falls more in the complex category than in the realm of fun gadgets. History eliminates gimmicks, putting aside the old question of categories.

One artist – the Venezuelan Carlos Cruz-Diez, 94 – is a major figure.

Another – Gyula Kosice (1924-2016), a Hungarian expatriate in Argentina – is a wonderfully eccentric, largely self-taught, whose fantastic futuristic sculptures are an unexpected pleasure.

In between are figures of established international repute, such as Julio Le Parc, who “paints” shifting fantasies of reflected light, and JesÃºs Rafael Soto (1923-2005), whose extremely refined geometric abstractions probe the habits of perception. . Notable but lesser-known artists include Argentinian couple Martha Boto (1925-2004) and Gregorio Vardanega (1923-2007), who experimented with optical light boxes, individually and together, for various effects.

“Kinesthesia: Latin American Kinetic Art, 1954-1969” brings together two general types of work. One is the art that physically moves – or, optically, appears to do so, as in Vardanega’s ever-evolving flashing light bulb designs. The other is art that remains essentially still, but to be fully seen – fully experienced – requires the viewer to move.

Cruz-Diez’s work is of the latter type. “Chromosaturation” is a breathtaking installation from 1965 that the artist has adapted to the available space of the museum. (A different version was shown in Los Angeles seven years ago at the Museum of Contemporary Art.) The floors, walls, and ceiling of three adjacent cube-shaped rooms are pure white. These architectural containers form a spatial “canvas” lit from above by square luminaires of thin fluorescent tubes in green, red and blue, the primary colors of light.

Move through and between spaces and the saturation of atmospheric color intensifies and merges. The rods and cones in your overwhelmed eyes are having a hard time adjusting. As they do, the colors overlap and merge by reflection. Spatial areas of transparent purple, orange and other rainbow hues surprise expectations and complicate internalized perceptions.

Cruz-Diez manipulates volumes of colored space rather than colorful shapes and forms, which can be found in abstract paintings and sculptures. Working backwards, he also adapts the environmental phenomenon to a wonderful group of paintings on sculptural accordion-pleated surfaces. Two-dimensional and three-dimensional colored squares vaporize in luminous veils as you move through its painted reliefs, adding the fourth dimension of time.

Cruz-Diez’s work, relevant to so much newly created participatory art today, feels fresh. This is in part because it belies many current assumptions about the supposed limits of painting and sculpture. And that’s in part because his installations internationalize the LA-based dynamic of Light and Space art in the 1960s by artists such as Robert Irwin and Doug Wheeler.

Kosice, who was born Ferdinand Fallik but chose to bear the name of his hometown on the Hungarian-Slovak border, was one of the founders of the Madi group from Buenos Aires after World War II. From the bitter ashes of the Holocaust and Hiroshima has emerged a forward-looking creative play spirit. The acronym Madi defended an art of movement, abstraction, dimension and invention.

Seemingly out of left field, Kosice worked on his wild installation “Hydrospatial City” for 26 years, starting in 1946. Twenty suspended architectural constructions in clear acrylic are like upside down space stations hovering in fluid darkness. (Look closely and you’ll find tiny characters on board: teleport them!) Some shapes suggest jellyfish, anemones, and other underwater creatures, occupants of an exotic fluid otherworld. Glittering points of light in seven illuminated wall reliefs that surround the large room create a glittering intergalactic environment – or, perhaps, portholes under a mysterious sea.

The “Hydrospatial City” – hydro because Earth is, in fact, mostly water – is a homemade version of a children’s miniature train blown up on a visionary scale. The plastic set may make you think of the transparent sculptures of the Hungarian artist LÃ¡szlÃ³ Moholy-Nagy. Suitably enough for Palm Springs, it is even reminiscent of the Lucite furniture designs of Charles Hollis Jones, period supplier to Frank Sinatra, Arthur Elrod, Tennessee Williams and John Lautner.

â€œKinesthesiaâ€ was hosted by guest curator Dan Cameron. The dates examined – 1954 to 1969 – constitute a quiet controversy.

The history of kinetic art generally dates back to 1955, when the Hungarian Op artist Victor Vasarely and the Parisian art dealer Denise RenÃ© organized the exhibition “Le Mouvement” in her gallery on the right bank. Champs ElysÃ©es. (Soto, along with Calder and Duchamp, was among the artists included.) The title was a sneaky pun: “The Movement” foretold that kinetic art – an art of movement – was itself an artistic movement in itself. full fledged.

The Palm Springs survey recognizes the influence of this historic exhibit, but it begins a year earlier to point out that many South American artists were already working in kinetic modes. Their forward-thinking good faith is polite.

That virtually all of the artists went to France in the 1950s, some deciding to stay there permanently, was a double whammy. The artists found a generally favorable environment; but, historically, the postwar Paris school languished in the engulfing shadow of the ascending New York school. Choosing to work in Paris, the scene of yesterday’s race to glory, did not help South American modernism, which already did not have much international notoriety.

The exhibition’s closing date in 1969, however, turned the art of Paris upside down. The tumultuous student revolt of 1968 was a decisive marker in the cultural life of France. South American artists continued, both in Europe and at home.

To some extent, “kinaesthesia” is a possibly futile attempt at rebranding. The word indicates how long the established term, Kinetic Art, now demoted to subtitle status, has been. But the bodily and muscular sensation which is the real domain of the science of kinaesthesia has little to do with this art. Perceptual experience, of which kinesthesia is only a part, is more thorny and multifaceted.

This exhibit, a Pacific Standard Time: LA / LA initiative project underway in art museums across Southern California, will surely help reconsider the genre. It’s long on complexity and short on gadgets. Kosice’s stated artistic philosophy took on one word – joy – and sentiment could speak for all nine artists.

When: until January 15; closed wednesday

Street installation by artist Carlos Cruz-Diez at the Broad