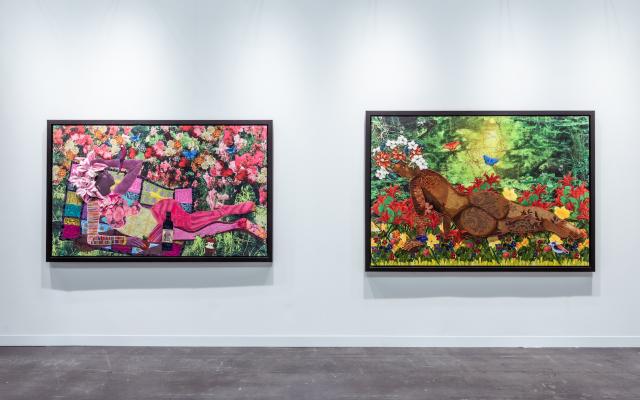 This year saw a mix of in-person and virtual presentations. The armory featured 157 massive galleries from North America, Europe and Asia. However, due to travel restrictions, fifty-five international galleries have chosen to exhibit on the fair’s digital platform, Armory Online. In previous versions of the fair, modern and contemporary exhibitors were presented on two different platforms but, for the first time, the works were presented side by side.

While it certainly wasn’t business as usual, the adjustments made to even be able to produce fairs of this magnitude during a pandemic are impressive to say the least. While the number of galleries participating in the Armory this year was impressive, the necessary size of the fair, stretched across the Javits Center, made the event overwhelming.

Independent was also back this year in a brand new space. Imagined by gallery owner Elizabeth Dee, this fair has taken on its full meaning over the past eleven years. For the twelfth edition of Independent, the fair has also moved to a new location – the recently renovated historic maritime building which also houses the iconic Cipriani restaurant. With a panoramic view of the Hudson River, festival-goers were treated to a new side to this exciting fair, which was the best of the two.

“This show has been exceptional and we have witnessed a particularly strong commitment from Independent to create a diverse audience, even under the harsh conditions imposed by limited international travel. It was a positive continuation of our past experience of the fair at its former Spring Studios location, ”adds Ross.

Since the start of the fair, it has distinguished itself by offering viewers a very small and targeted group of smaller-scale galleries who are invited to participate in the proposal process. The result is a meticulously curated event in which festival goers get the best parts of Art Week. Independent was an easier-going fair with work from forty-two galleries this year, compared to the fifty to sixty it normally exhibits. This twin event was beyond what art lovers have missed over the past year and a half.