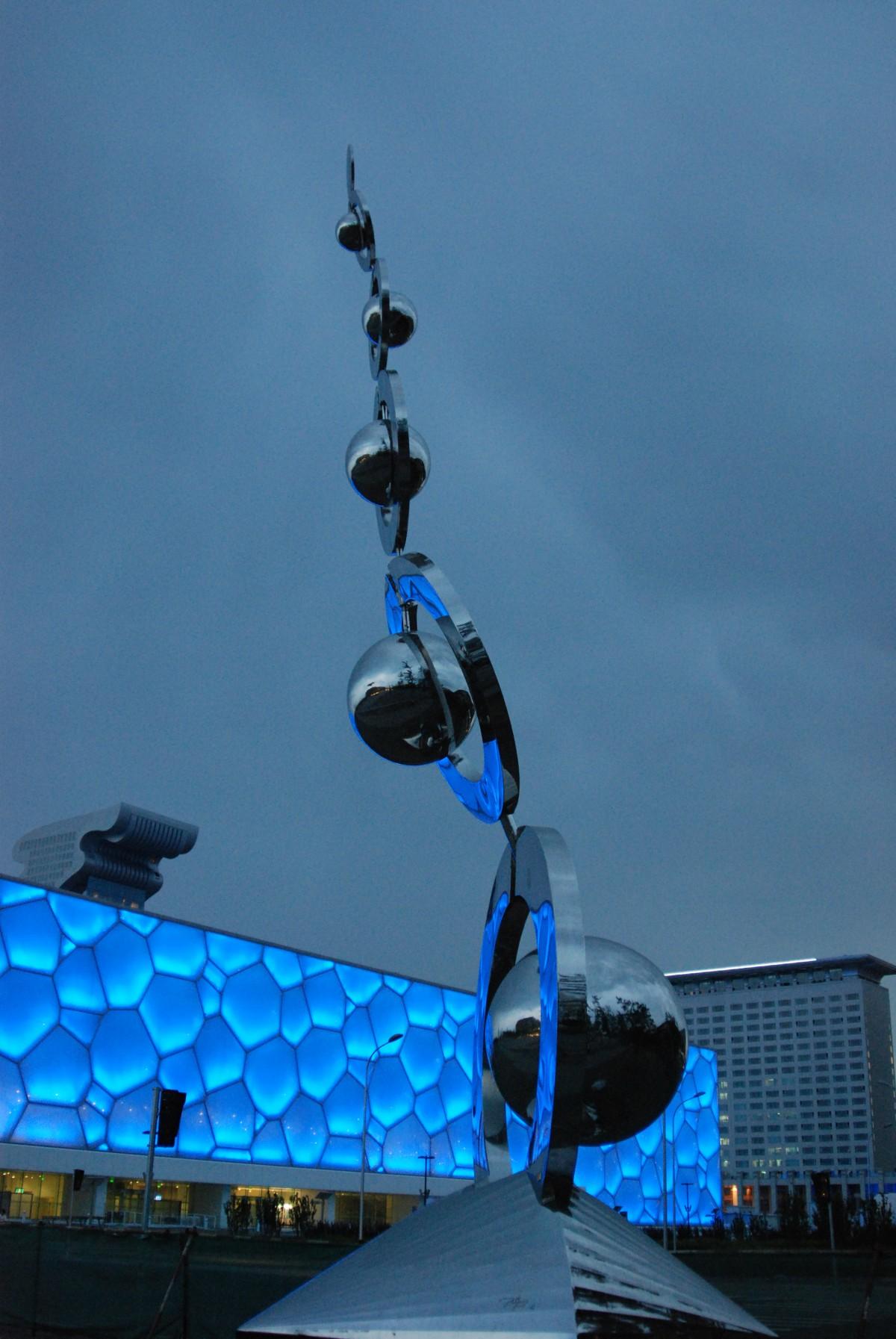 Art is subjective and sublime, even subliminal and subversive. Some pieces move you, others don’t. Then there’s kinetic art which is pretty much always in motion – literally, depending on which direction the wind of appreciation is blowing. Thanks to an enthusiastic artist named Ralfonso, kinetic trade winds travel across three continents and even land in luxurious homes in the United States.

Kinetic art is described as sculptural constructions with moving parts, activated by wind, motor, pressure or other means, often using variable elements like light, sound, color, vibrations, l ‘electricity. This is dynamic interactive art, not the static type that people passively walk around in museums. Kinetic art is both contemplative and visceral, evoking powerful reactions that can be as tranquil as a pool of reflection or as hypnotic as a thunderbolt. Kinetic art gives as well as it takes.

The term “kinetic art” was coined by artists Naum Gabo and his brother Antoine Pevsner in 1920 but popularized by the mobiles of artist Alexander Calder and the kinetic sculptures of George Rickey. Kinetic art is typically displayed as large-scale outdoor public sculptures in parks, plazas, plazas, gardens, corporate complexes, or along lakes.

The Swiss-born sculptor Ralfonso Gschwend (alias “Ralfonso”) is the main promoter of the modern kinetic art movement. He is an internationally renowned master designer of unique sculptures that interact with water, wind, electricity, natural environments and observers. Each sculpture is inspired by nature using mechanics as complicated as the mastery of watchmaking.

His wind sculptures range from two to 10 feet for private collections and exhibitions, and from 10 to 60 feet for public spaces. The artists’ sculptures have been exhibited or permanently installed in the United States, Switzerland, France, the Netherlands, Russia, Germany, Hong Kong, the United Arab Emirates and China (where the crafts kinetic art is the most popular).

“In the 1950s, the kinetic art movement was established and largely driven by talented artists Alexander Calder and George Rickey,” says Ralfonso. “Today there are very few known kinetic artists in the world, but there is renewed interest. in kinetic sculptures because of their innate connection to nature and their contribution to sustainability.

Obviously, Ralfonso excelled in metallurgy in school. His 33-foot-tall sculpture “Dancing with the Wind”, commissioned for the 2008 Olympic Games in China, stirs in front of the Beijing National Aquatic Center. His colorful and electric (20ft) “ExStrata SMS and Internet Light Sculpture” at Tsinghua University has also taken up residence in Beijing. A “Moving On Up” helical spiral (16.5 feet) soars skyward in St. Petersburg, Russia. Stainless steel twist (10 feet) moves in the wind on Lake Geneva in Switzerland. Tubus (a 15 meter long tunnel that people can walk through) corkscrews horizontally in the Netherlands.

“At MoCA in Beijing, we are very proud to be the first museum in China to have acquired a kinetic sculpture (a small-scale version of ‘Dancing with the Wind’) for our permanent collection,” said Michael Suh, director executive of the Beijing MoCA. Museum of Contemporary Art (MoCA). “I appreciate Ralfonso’s truly original style, his clean and seemingly simple ‘art in motion’ designs, but most of all, I love the way his sculptures move so beautifully in the wind.

The artist also has the wind at his back. His 19-inch reduced prototype of “Dancing with the Wind” was chosen for the contemporary auction organized by Sotheby’s in March. This mirror-polished stainless steel version of the sculpture was designed in 2007 and sold at auction as one of only 10 created in a limited edition series. It sold for $ 18,750.

Recently, Ralfonso titled The art of sustainability symposium to show how his kinetic sculptures react to natural environments and how they can be energetically positive by generating electricity. Previously, he spoke about his kinetic art inspirations on CNN International Art of movement documentary.

From his studios in Geneva and West Palm Beach, Florida, the Kinetic Artist is currently developing a series of eight to ten small-scale wind sculptures, many of which will be ready by mid to late spring. One of his new sculptures is a commissioned piece called Flamenco.

“The small-scale series that I create is more specific to galleries and showrooms,” says Ralfonso. “But for private commissions, I will create personalized sculptures, unique and specific to a particular space. Whether it’s for a super modern home or a traditional home, I’ll create the size, colors, functionality, speed of movement for that specific environment, which is fun.

This is how a new residential trend was born: captivating kinetic art for the patio, garden, roof or backyard. These small-scale wind sculptures transform ordinary interiors into interactive shrines (and conversation pieces) that can dramatically distinguish a residence. If you like the calming sound of wind chimes, wait until you are in the presence of these kinetic sculptures.

One can virtually visualize the kinetic function of the artistic nicknames of Ralfonso. “Dance with the Wind” flutters back and forth guided by his dance partner – a stiff breeze. The scorching new “Flamenco” stands tall and straight with perfect posture, deliberately twirling in the wind like the traditional Andalusian dress of a bailaora in the middle of a song.

Flamenco is an eight foot tall fire red sculpture commissioned for residents of Sherry and Tom Barrat, Singer Island, Fla. Who want a centerpiece to complement their expanded oceanfront patio designed by Kona Gray of the architectural firm EDSA. This is the couple’s second kinetic art purchase.

“We like the way [Flamenco] will fit into our space and let it look upwards, ”explains Sherry Barrat. “Living on the ocean means it’s very windy most of the time, so we were concerned that a kinetic piece would move too quickly and be a distraction rather than an inspiration. We live in Florida, so hurricanes should be planned for as well.

“Ralfonso came up with a design that drastically reduces wind resistance and moves slowly. It will have a locking feature so that we can prevent it from spinning at all if needed. And in the event of a hurricane approaching, Ralfonso found a portable elevator that he is modifying so that we can move the sculpture inside.

Fans of kinetic sculpture, the Barrats are fascinated by the genre’s mix of scientific engineering and creative art, which they believe has entertained them (and their guests) for many years.

“The lines are clean, contemporary and sophisticated,” says Sherry Barrat. “You marvel at the way he makes the movements work. I love art that conveys a bit of fantasy.

Ralfonso is the president / co-founder of the Kinetic Art Organization, a global community of artists engaged in the promotion of kinetic, mobile and interactive sculptures around the world (through exhibitions, symposia, promotions, conferences, workshops). KAO has over 1,000 members in 60 countries.

The kinetic art pioneer suggests that the world has become less passive and more interactive: phones are now computerized accessories; Television is no longer a passive viewing box but an interactive programming device; and even passive wooden blocks have given way to WiFi-enabled devices. So why not some interactive art in and around the house too? “In our fast-paced world, everything seems to want to become interactive,” he says.

The winds of change are upon us, in part because of the modern kinetic art movement of Ralfonso and KAO, which competes to take the United States by storm. If those winds keep blowing, kinetic art is movement guaranteed to never stop.

The Kinetic Art of Felipe Pantone

Windmills and metronomes meet in a new kinetic sculpture