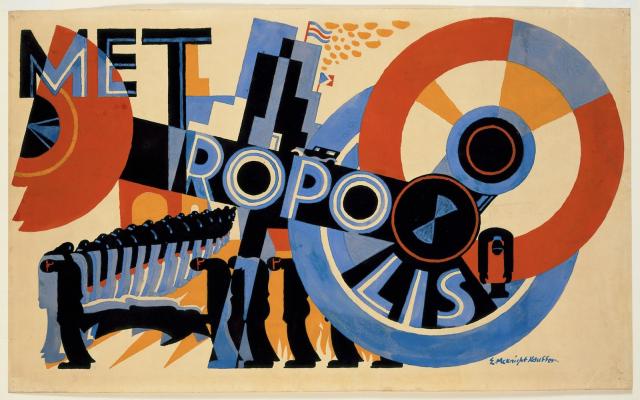 The Cooper Hewitt, Smithsonian Design Museum is currently home to the largest exhibition of works ever produced by E. McKnight Kauffer (American, 1890–1954), a pioneer of commercial art, the profession known today as design graphic. On view from September 10 to April 10, 2022, Underground Modernist: E. McKnight Kauffer presents over 150 objects to examine the impact and the designer’s legacy through media.

Hailed during his lifetime as “the king of posters”, Kauffer brought design to many creative industries. He made modernism accessible by applying cutting edge styles to designs for advertising, literature, theater, transportation, etc. It has adopted the emerging avant-garde aesthetic in a provocative way to promote services and products.

Cooper Hewitt holds one of the largest collections of Kauffer’s designs in the world, including material in both the Drawings, Prints & Graphic Design department and the Archives department. The exhibition is curated by Caitlin Condell, Associate Curator and Head of Drawings, Prints & Graphic Design at Cooper Hewitt, and Emily M. Orr, Ph.D., Associate Curator of Modern and Contemporary American Design at Cooper Hewitt, with Caroline O ‘Connell, Conservation Assistant, and Kristina Parsons, Conservation Assistant.

“Underground modernist will reveal new stories and research to position Kauffer not just as a poster designer, but as a figure who has widely applied the graphic arts to creative pursuits, ”said Condell. “It transformed the public’s perception of modernism and influenced the work of other equally important artists, designers and writers on both sides of the Atlantic.

“Building heavily on Cooper Hewitt’s unique collections of Kauffer’s work, the exhibition will explore the wide circulation and popular resonance of Kauffer’s creations,” said Orr. “Motivated by the desire to serve the public, Kauffer brought art closer to everyone. He believed that advertising was an opportunity to introduce new visual expression.

Organized chronologically into ten sections, the exhibition will trace Kauffer’s career from his beginnings as a painter to his transformation into an internationally renowned commercial artist. At the peak of his career in the 1920s and 1930s, Kauffer, an American, was one of England’s most influential artists. In 1940, he moved to New York, joining the influx of European designers who boosted American advertising. His remarkable output includes eye-catching posters for the London Underground, illustrations of famous literary works and iconic graphics for major corporations such as Shell-Mex and American Airlines.